Meanwhile, while doing sketches, digitally and traditionally I have been working on how to turn my designs of the triptych into a real triptych.
MDF at the sides is very fragile so you cannot just put screws in it.

My first design is actually using canvas, as you see, the back has a little bit of canvas showing through, that piece of canvas is actually what is holding the panels together. 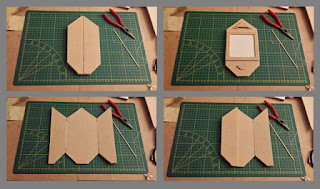 The second design, now just painted up, edited into Krita, the free digital painting program, will actually have hinges screwed into the frames instead of the mdf and might actually have canvas in the frames. 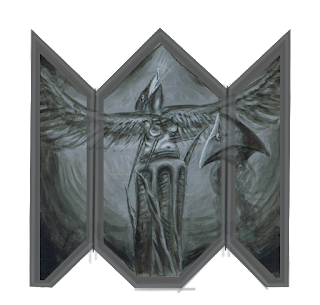 What I did read up on panels is that in 'ye olde days' the panels were actually made with frames already attached when they intended it to be a finished piece. This was a very interesting and inspiring detail. One I might work with more in the future.

Thus the second will be full sized and the first might be getting a big version if it works out well.
And I'll might be making more of these triptych like things. It adds a lot to work itself. It makes it more a piece instead of just a panel with an image on it.
This might actually be one of the reasons why one would want to own a painting physically instead of a digital version of print. Like, another reason, instead of just how the oil works visually with the light through the layers and mixes instead of flat/pointilistic composed images on screen/print and the visual of seeing the actual paintstrokes in stereo.