The process continues, the arrival of the microdrill.

I've been working on my triptych, yet forgot to upload the pictures.
The gessooing went well, the triptych works well yet of course, in this version the painted layers would be pressed against each other. 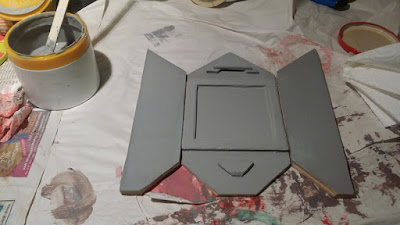 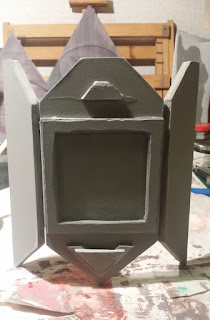 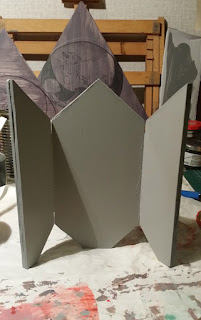 The version for which I needed the drill will have the frames separating the painted surface from each other. The hinges will be screwed into the frames, at four points. I also made a re-design so that the inside image will be one complete painting instead of having the frames split it into three parts by the framing. 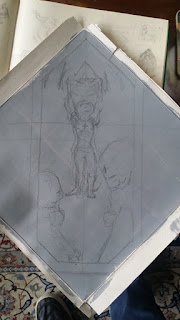 Did some designing, redesigning, paintstakingly trying to figure out how to make the triptych work, physically. Ordered a microdrill to make holes for the screws so that the screws wouldn't break apart the frames. And today it arrived, it is a nice small thing.
I begin to realize I am sort of delving into new territory here since I cannot find a lot of tutorials on the stuff I want to do. Which means that it is either impossible or few have done it before.

Now back to work, got to do a little more designing of the last character and then sketch the linework on the actual panels of the small triptych. Which will be done in acrylics, which will hopefully 'stick' less. With oilpaint, it will take ages for the painted surface to be dry enough to be pressed together without damaging. Acrylics dry faster so hopefully will be able to be presentable sooner.