The final version of the front in 3d. Or well.
It is photographed as an 3d object instead of scanned like a 2d one. 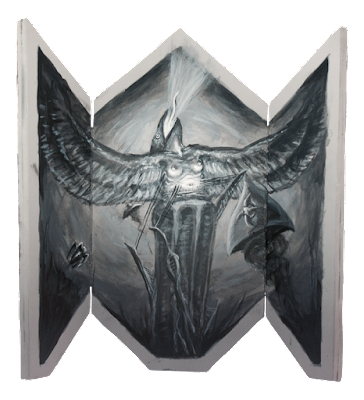 This for a magazine of the NABK which will be released at the Brabant Art Fair and Eindhoven Art. Two Dutch art exhibits/fairs. I won't be exposing my art there, but the magazines will be there displaying at least one piece of my art. Or well, part of it, not sure if they will be putting the front in as well.

Anyway, now only the back needs to be painted, I already made a sketch.
Today I'll at least make the line-art.
It took long to get a good image with my photo-camera. Considering it needs to be lighted and positioned the right way. 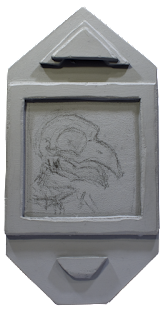 Meanwhile I'll be also be doing this image. 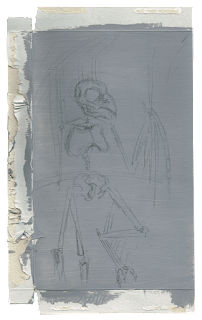 I have planned some more paintings, made especially to try out overlaying colour over grayscale.
As a study for the bigger painting. I know oils and acrylics aren't quite the same, but it will at least give me a quick idea. Perhaps I might even do an acrylic grayscale with oilpaint on top.

Meanwhile I'll continue working on the larger triptych.
Posted by Kyoffeh at 3:46 PM